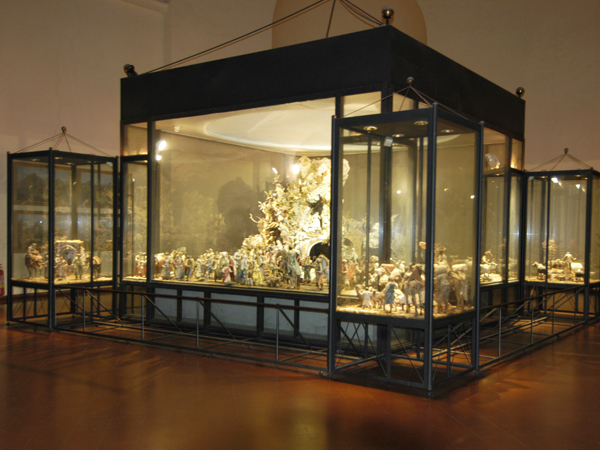 Crib figurines
The Neapolitan tradition of the crib is an ancient custom that was shared and maintained by the Bourbon monarchs. Francis I (1777-1830) of Bourbon was actually a collector of crib figurines. At Christmas, an enormous crib was set up in the Palace of Caserta. All the figurines were placed on the base of the structure, made of cork, and then moved to represent the traditional scenes including the Nativity, the angel appearing to the shepherds and the inn. Famous artists such as Sanmartino (1720-1793) and Celebrano (1729-1814) dedicated part of their time and skills to the creation of crib figurines, but it was mainly artists specialising in this art form that worked on the royal crib. The heads, hands and feet of the figurines are made of terracotta, whilst the body is in oakum and wire. The room also holds the distempers by the painter Salvatore Fergola (1799-1874), depicting crib scenes.