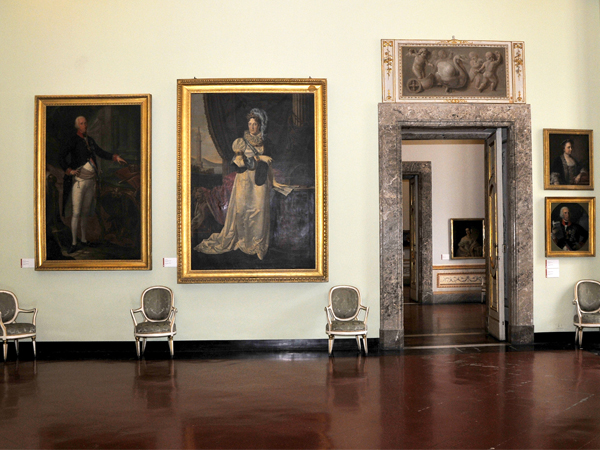 Views of the ports of the kingdom

The Antonio Joli set
The rooms of the Pinacoteca house paintings that document the cultural orientations and artistic choices of the Bourbon and Farnese clients. The first rooms house the so-called "Fasti Farnesiani" or "Farnesian splendours". This is followed by the Charles of Bourbon Room, dedicated to the founder of the dynasty of Neapolitan Bourbons, and subsequently the room of the "Bourbons of Naples, Spain and France" which houses portraits that clearly demonstrate the relationships between the Bourbon royal family of Naples and those of Spain and France. The Francis I and Ferdinand II Room houses portraits of the family of Francis I of Bourbon, as well as the portraits of Ferdinand II (1810-1859) and of the queens Maria Cristina of Savoy (1812-1836) and Maria Teresa of Austria (1816-1867). This is followed by the "genre painting" and "allegories" rooms. The wing of the Pinacoteca dedicated to landscapes displays the Views of the ports of the Kingdom by Jacob Philipp Hackert (1737-1807) and paintings by various artists who were active at the Court of Naples, including Antonio Joli (1700-1777).