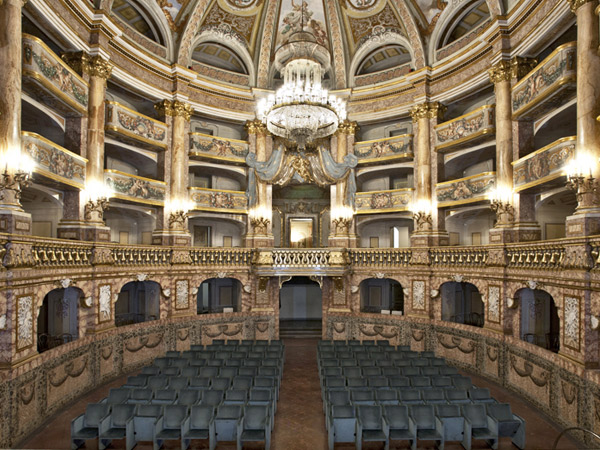 Royal box
The Court Theatre, very similar to that of San Carlo in Naples, was designed by Luigi Vanvitelli only after 1756. Housed within the palace and for the exclusive use of the court, it was inaugurated in January of 1769 by the young royal couple, Ferdinand IV and Maria Carolina, as testified by the coats of arms on the ceiling. Equipped with a private entrance which enabled the King to reach the Royal Box directly, it has a classic horseshoe form, with five tiers of boxes and alabastrine marble columns. The central part of the ceiling is decorated with a fresco painted by Crescenzo La Gamba (1749-1783), depicting Apollo tramples the python underfoot, a symbol of vice. The stage is equipped with a portal which opens onto the park, creating an atmospheric natural backdrop.