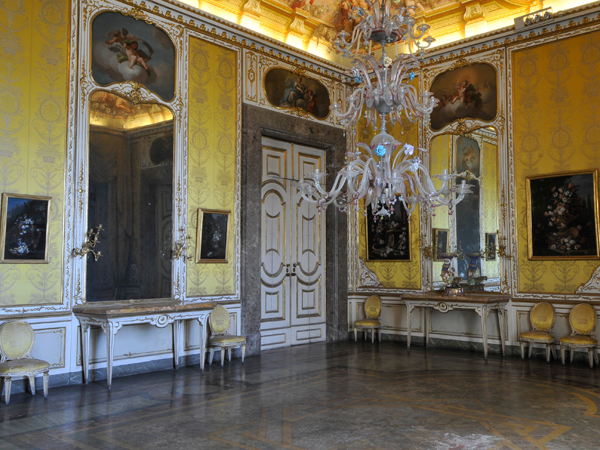 The meeting between Bacchus and Ariadne
The ceiling of the Autumn Room, defined in the inventory notes as the "room behind the audience room", was painted by Antonio de Dominicis (1734-1794) with The meeting between Bacchus and Ariadne. The painted lintels and decoration above the mirrors were painted by Gaetano Starace (second half of the eighteenth century) and depict, from the left: Ceres, Allegory of Diana, Vulcan, Allegory of Saturn, Juno, Allegory of Apollo, Neptune and Allegory of Mars.
The furnishings comprise four large mirrors and three consoles with tops in Vitulano marble. The engraving work and the wooden and lead panelling which frames the walls of the room were created by Gennaro Fiore (second half of the eighteenth century), whilst the gilding and the painting of the ends was done by Bartolomeo di Natale (documented in Caserta in the 1880s).