The meeting between Bacchus and Ariadne 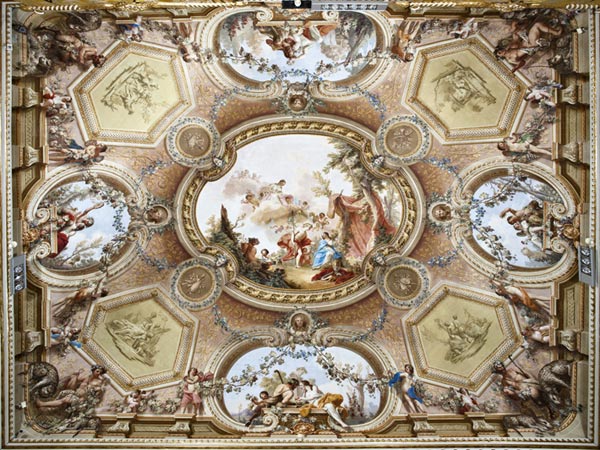 A. de Dominicis, L’incontro tra Bacco e Arianna, Caserta Palazzo Reale, sala dell’Autunno, affresco della volta
The room's ceiling was painted by the Palermo painter Antonio de Dominicis (1734-1794). The central medallion depicts the scene of the meeting between Bacchus, god of wine, and Ariadne, daughter of Minos, King of Crete. With the legendary ball of thread, Ariadne saved Theseus from the Minotaur in the labyrinth of Crete, but subsequently, abandoned by Theseus on the island of Naxos, she became the wife of Bacchus.
In the lower part of the ceiling are scenes of Arcadian love between satyrs and maenads. The decoration in the form of garlands and tendrils that links them is the work of Giacomo Funaro (active in the royal apartments between 1780 and 1781).