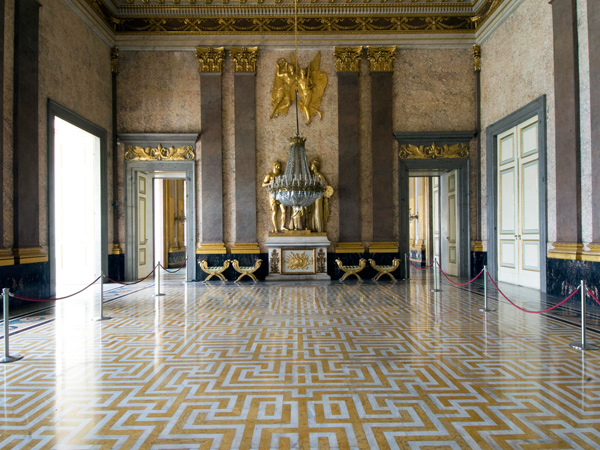 Gilded stucco reliefs
The Astraea Room, once an "antechamber for professional gentlemen, ambassadors, secretaries of state and other privileged persons", takes its name from the ceiling painting The Triumph of Astraea, goddess of justice, a work by the French painter, Jacques Berger. The gilded stucco reliefs of Minerva as Reason between Stability and Legislation, a work by Valerio Villareale, and Astraea with Hercules and the provinces of the Kingdom, a work by Domenico Masucci, were placed on the end walls, which are decorated with faux marble, in 1822. Hercules holds the Bourbon lily in one hand to symbolise the union between the two families of Farnese and Bourbon; in the centre Astraea carries a set of scales and a pendulum, symbols of justice and equilibrium; on the right is the personification of the Kingdom of the Two Sicilies.