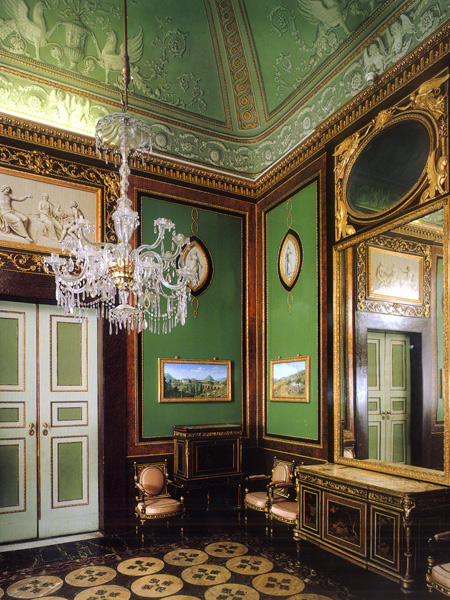 Caserta Palazzo Reale, Studiolo di Ferdinando IV di Borbone
In what the old inventories refer to as the “Ornate Study of HM the King”, the wood-panelled walls feature a series of gouaches– by J. P. Hackert in the 1780s and ’90s – depicting the most important royal sites and Ferdinand’s favourite places. The furnishings comprise a set of chairs by Georges Jacob and copies of the furniture by A. Weisweiller bought in Paris in the late ’90s. The vault ornamentation with monochrome figures is by Gaetano Magri, while the divinities depicted on the overdoors are the work of  J. H. W. Tischbein. And finally, Carlo Brunelli created the seven oval medallions decorating the wall panels with “arabesque figurines”.
Tweet