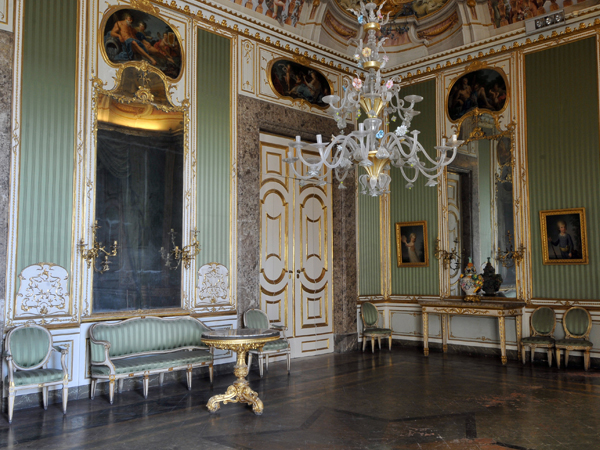 Coffee table with petrified wood
The frescoes in the Summer Room were created by the painter Fedele Fischetti (1732-1792) with Proserpine who, during summer, returns from the Kingdom of the Dead to her mother Ceres. The mythological theme alludes to the cycle of the seasons and is completed by cherubs jostling on the balustrades, which mark the painted architecture of the ceiling, a work by Giacomo Funaro, who was active in the royal apartments from 1780 to 1781. The lintels, painted by Giovan Battista Rossi (documented from 1749-1782) depict the Liberal Arts. The furnishings of the room, which was also known as "the room where the King gives audience" comprise corner cupboards and consoles with marble tops from Mondragone, created by Gennaro Fiore (second half of the eighteenth century) and Bartolomeo di Natale (documented in Caserta in the 1880s). The consoles bear two porcelain vases from the renowned manufacturer Meissen. At the centre of the room is a little table with a petrified wooden top.