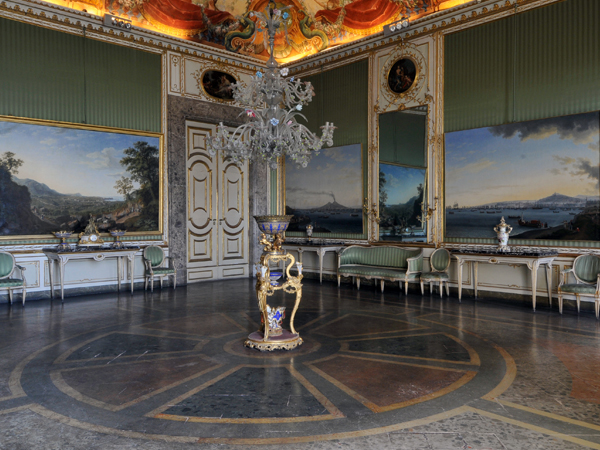 The shipyard at Castellammare at ...
The Alexander Room leads into the Old Apartments, dating back to the eighteenth century. In 1773, the architect Carlo Vanvitelli (1739-1821) took over from his father Luigi (1700-1773) to direct the works in this wing of the palace, which begins with the rococo grace of the rooms dedicated to the seasons. The frescoes in the Spring Room, originally the first antechamber to the south, were created by the painter Antonio de Dominicis (1734-1794) based on the theme of spring. The lintels and the decoration above the mirrors depict the allegories of Music and Poetry and are by Giovan Battista Rossi (documented from 1749-1782). The paintings on the walls are by Jacob Philipp Hackert (1737-1807), starting from the left: The shipyard at Castellammare at the moment when the ship Partenope launches, The shipyard at Castellammare with its convicts, View of Forio on Ischia, The Bay of Naples from Santa Lucia with the return of the squadrons from Algiers, View of the port of Naples with Castel Sant'Elmo and The port and Abbey of Gaeta.