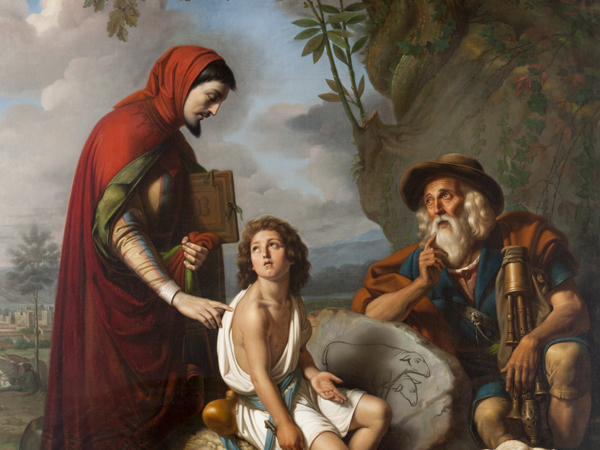 Tommaso de Vivo was a student at the Academy of Fine Arts in Naples, but in 1821, funded by a pension from the Royal Institute, he moved to Rome where he attended the studio of Camuccini. He took part in a number of the Bourbon exhibitions with paintings along mythological and historical lines. Around 1833, he produced the drawings for the illustration of the History of the Kingdom of the Two Sicilies, edited in Rome, and in the 1840s, he painted three Allegories of the Divine Comedy, commissioned by Ferdinand II of Bourbon who appointed him Inspector General of the royal picture galleries. His paintings are preserved at the Royal Palace of Naples, the Royal Palace of Caserta and the Museum of Capodimonte. His celebratory paintings of allegorical subjects include the Allegory of Strength and Timidity with Mars and Venus, purchased by Margaret of Savoy in 1869, and Italy and its Geniuses, donated to the Italian Senate.