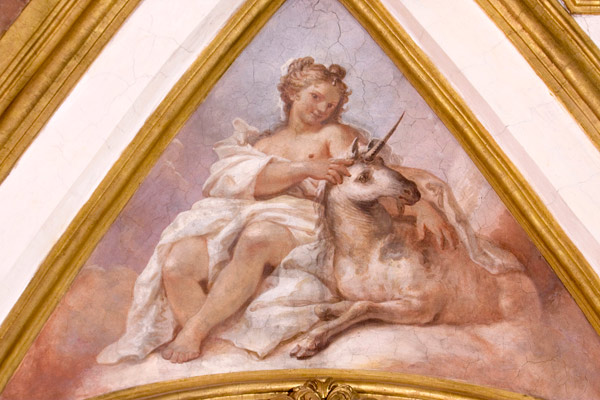 After an initial apprenticeship in the workshop of Luca Giordano, Paolo De Matteis moved to Rome where he frequented the studio of Gianmaria Morandi and became an acquaintance of the Marquis of Carpio, Spanish ambassador to Rome. When the latter was nominated Viceroy of Naples (1683), he returned to the city and there, back in contact with Giordano, attempted to find synthesis between the style of the maestro and the classicist culture of Carlo Maratta and Luigi Garzi, which he had learned in Rome. The Madonna and Child (1690) for the Neapolitan Church of San Giovanni dei Fiorentini was the first in a long series of religious images created by the artist during the course of his career, including: the canvases of the imperial college of Madrid (San Isidoro cloister), the frescos for the New Jesus and those of the pharmacy of Certosa di San Martino monastery. Between 1703 and 1705, he lived in Paris, at the invitation of the Conte d'Estrées, one of his most illustrious clients, which also included Count Daun, Austrian Viceroy in Naples, Prince Eugene of Savoy and Pope Benedict XIII.