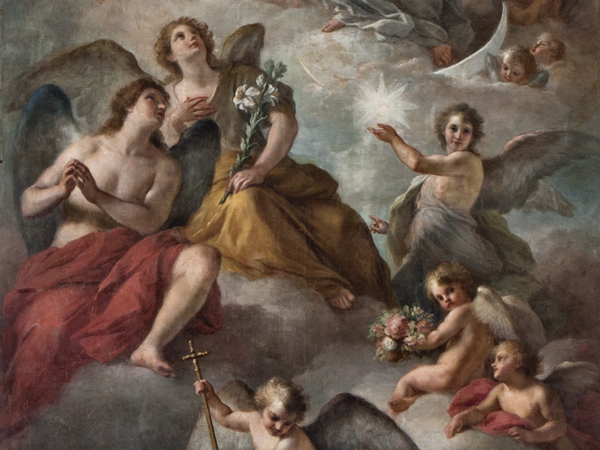 A student of Francesco Solimena, Giuseppe Bonito was inspired by the traditional values of Neapolitan painting in contrast to the classical tendencies coming from Rome, becoming a point of reference in Neapolitan artistic circles. He was the First Painter of the Court and a famous portraitist. One of his most celebrated works is the Portrait of Maria Amalia of Saxony, the wife of Charles of Bourbon and Queen of Naples. Having already worked on the fresco decoration of the Palace of Portici (1736-1742), in 1751 he was nominated Painter of the Chamber by King Charles of Bourbon, and in 1752 he became a member of the Academy of San Luca. In the same year, he also decorated the ceiling of the Basilica of Santa Chiara, of which now just a sketch remains in the National Museum of Capodimonte. From 1755, he became Director of the Academy of Drawing in Naples and consultant for the activities of certain royal workshops such as the tapestry laboratory, for which he created various tapestry designs (Stories of Don Quixote; Allegories of Conjugal Virtue). The Palatine Chapel at the Palace of Caserta holds one of Bonito's final works: the canvas of the Immaculate Conception(1789), still visible above the main altar.