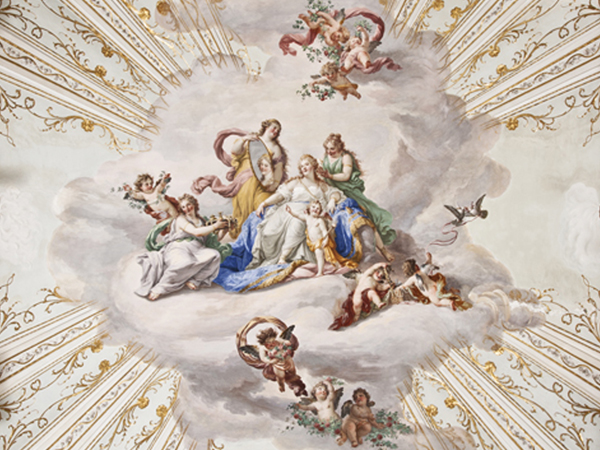 Noted for his paintings characterised by allegorical subjects or scenes of mythological characters, Fedele Fischetti was born and studied in Naples, but probably completed his training in Rome following the example of Francesco De Mura and Giuseppe Bonito, as is revealed by his earlier works created in Naples (church of the Holy Spirit, church of Santa Maria in Portico, church of Santa Maria la Nova, church of Santa Caterina da Siena), dated between 1759 and 1766. These works reflect, almost literally, the iconographic and formal models of the new roman classicist leanings of Pompeo Batoni or Mengs. Superior in quality are the vast fresco decorations inspired by classical times, created after 1770 in churches and grand buildings in Naples (the palazzo Cellammare, the palazzo Doria d'Angri, the palazzo Fondi, the palazzo Carafa di Maddaloni, the Palace of Capodimonte, the Palace of Carditello, the Casino di San Leucio, the Royal Palace of Naples, Villa Campolieto at Herculaneum, etc.) produced within the context of complex commissions entrusted to the direction of architects such as Luigi Vanvitelli or Ferdinando Fuga. Fischetti also worked on the decoration of the Palace of Caserta (1778-81), where he created, among other things, the fresco of the Three Graces in the Bathroom of queen Maria Carolina, and that of the Summer room.